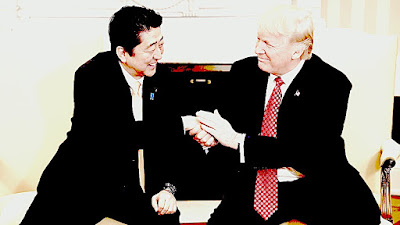 Under the new global scenario state visit of the US president, Trump, to Tokyo is very meaningful. In the beginning when Trump administration took over the power in Washington Japan-US relations faced a tough moment as Trump wanted to take more money in lieu of security provided to Japan. He made several rigorous comments of such effects during his electoral campaign. No doubt there was temporary stalemate from both sides to initiate the dialogue. Gradually Trump administration came out of its honeymoon hangover of the elections and started a dialogue with Japan and the rest of the world.

The biggest challenge for both the countries is North Korea and its nuclear policy. In recent days it has emerged as a big threat not only in Korean Peninsula but to global peace as well. North Korea has conducted several missile tests and threatened to hit Guam, an American territory, and strategic base. Japan, being the nearest country and an ally of the US can be a soft target. This common concern is an urgent issue to be addressed by both state heads.

In recent years the rise of China as an economic power and its global influence has worried the two countries. China has created troubles to its neighbors and its mega project in the South China Sea (SCS) is contested in international court too. Whereas the Philippines, the main contestant of free navigation in SCS, coming out of US ambit and supporting China has weakened the US claims. Though Japan has developed a healthy relationship with the Philippines and President Duterte visited Japan as well. China was also accused by the US to be liberal towards North Korea and not implementing strict sanctions against it despite UN resolutions to do so. This situation is going to be discussed when two leaders will meet.

Trans-Pacific Partnership (TPP), a well-designed trade formula by Obama government to boost business and trade in the Pacific region was abruptly scarped by Trump. It is strong possibility that some alternative concept may be discussed to compensate the demise of TPP. Japanese PM was very keen to go ahead with the TPP but it could not be realized. Mr. Abe will emphasize on any such partnership with a win-win situation.

There is a domestic problem, which is not going to be raised prominently, but it may find a space in under talks. Southern prefecture of Okinawa has the largest military base of the US. Local administration and the common public is opposing the US military activities. Whereas, Abe is willing to play a more aggressive role at global platforms in terms of military participation in maintenance of global peace and order; there is sharp criticism on the issue within the country.

Needless to say, that meeting between the two leaders will cement the relationship. Two great allies will fill their gaps, which rose during the shift of power in America. It is necessary to develop a better understanding in the context of Chinese expansionism, nuclear advancement of the North and growth of soft terrorism across the globe.
at 6:18:00 AM