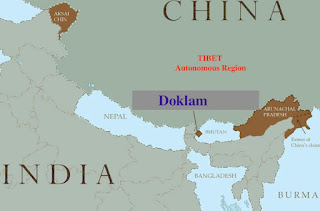 
Doklam is a tri-junction in Bhutan. Chinese will to develop infrastructure near border areas has been creating controversies between India and China. Doklam is just one of them. Chinese administration with the help of PLA began a road construction around two months ago, which was contested and protested by the Indian side and Bhutan supported India.


There were many stories in Chinese media to warn India and propaganda were floated to misguide the international community that Bhutan is supporting China. Indian PM was least responding to this issue but made powerful diplomatic efforts to apprise the world leaders about the facts. In turn, India received moral and diplomatic support from the US, Japan, Britain and the European Union on the matter.
Just a few days ago China decided to withdraw its army and committed to restoring the status quo. China is engaged in several territorial issues with its neighbors like Japan, Taiwan, India, and Philippines etc. China is anxious to become a world power and willing to stand parallel with the US. Geopolitical situations in Asia have posed a challenge to its desire. Japan, a robust economy, and India being a rich human resourced and vast landmass country continuously create challenges to Chinese dream. It seems that this dream is not going to fulfill in near future. Doklam has set an example.