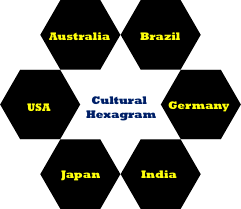 To achieve the goal of Public-Diplomacy and Cultural-Diplomacy among the member nations this project was launched in January 2016. It is a unique project of Center for Culture & Global Studies (CCGS), which promotes people to people contact and encourages cultural exchange among six countries viz. The United States of America, Germany, India, Brazil, Australia and Japan. This project is run for the youths and the students of the above countries. Every year youths from one under-developed /developing nations are also invited to participate.

Hexagram has been part of many different philosophies. Frequently defined as-a figure formed of six straight lines, in particular: a star-shaped figure formed by two intersecting equilateral triangles and any of a set of sixty-four figures made up of six parallel whole or broken lines.

Taking this idea from philosophy, we have used it for cultural purposes to connect the six great nations and ancient civilizations of the earth. The idea is also to connect the people of these civilizations in their own languages and to ensure, promote, communicate and create quality research. We have recently launched a journal 'GlobalculturZ' which accepts articles and creative works in English, Hindi, German, Japanese, and Portuguese.  English will be the lingua franca for all communications.

The focus areas under this project are-

Academic activities and direct public participation are set as the primary objectives.

Email ThisBlogThis!Share to TwitterShare to FacebookShare to Pinterest
Home