Jerusalem: The Bone of Contention 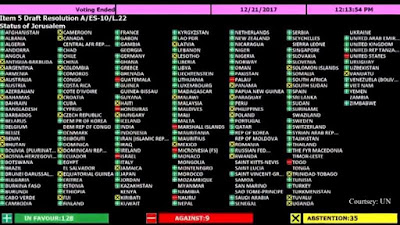 Yusuke SEKIMOTO
United Nations University, Shibuya
Japan
E-mail:info@globalculturz.org
Donald Trump, unilaterally, declared and gave recognition to Jerusalem as the capital of Israel. This created a sentiment of despair in the international community. Arab nations, as expected, protested the move put the issue in UN general assembly to discuss, debate and vote upon it. The results of the same were declared and the US was cornered completely as 128 nations supported the status quo.
Trump administration tries to give a strong message to other nations to follow it verdict and support its decision. The US ambassador to UN, Nikki Haley, issued a warning to UN and other countries to oppose the motion moved by the Arab nations or else face fund cuts. It didn’t work out. Only 9 countries, lesser known to people, opposed the move and the rest either choose to be absent or support the motion.
Jerusalem is a place where the confluence of three major religions happened viz. Judaism, Islam and, Christianity. In 1967, Israel annexed the East Jerusalem and declared its capital. It was opposed by international community and never recognized. Most of the nations maintain their diplomatic missions and embassies in Tel Aviv. Now, the US has decided to shift its embassy to Jerusalem. It will create an anxiety among Muslim nations and there are possibilities in an increase of violent clashes between Israel and Palestine.
Trump Administration has to learn a lesson from its defeat at UN floor and it must re-adjust its foreign policy. Developing nations are no more dependent on the US for their development and international existence. The emergence of China and India as an economic power posed a substantial threat to the US. Rather US economy cannot afford to lose a big market of China and India, inhabiting almost half of the world population. In this changed scenario, any egoistic decision will be turned down severely. Oliver Stuenkel in his book, Post Western World, has categorically indicated the rise of the Asian Countries particularly China and India. The western countries will not dictate the new world order but it is going to be defined by the Asia or the rest of the world.
Political administrations all across the globe are unable to cater the wishes and demands of their people. They need superficial issues to engage the general public of their countries. It is a mechanism to divert the attention of common people from the issues of employment, better life and clean air. Jerusalem is such an issue, which is emotionally attached to the followers of Judaism, Islam and, Christianity.
There are violent clashes among Israeli army and Palestinians since the US declaration. Though the global community has turned it down, there is a doubt that America will propagate its agenda. It will also provide an opportunity to radical Islamist groups, like ISIS, to consolidate Muslim resentments and revive them. The US has to understand that, such decisions will affect the world order and global peace processes. It is neither necessary nor important in a contemporary international scenario. A soft power can serve the purpose.
at 5:48:00 AM