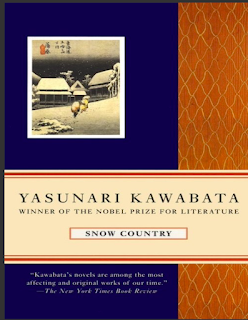 In a recent broadcast, NHK, the national broadcaster of Japan has presented the dramatic replica of ‘Snow Country’ a Nobel Prize awardee novel of Yasunari Kawabata. This novel was published in its final form just after WWII in 1947 and gained attention of global readers. Today with the concerns of climate change dabates, its relevance emerged again. EDWARD G. SEIDENSTICKER translated this masterpiece which is widely respected among readers. In the introductory note he observed, “Kawabata was born near Osaka in 1899 and was orphaned at the age of two. His short stories began to attract attention soon after his graduation from Tokyo Imperial University. He presently became a leading figure in the lyrical school that offered the chief opposition to the proletarian literature of the late twenties. Snow Country was begun in 1934 and published piecemeal between 1935 and 1937. In 1947 a final installment was added, and the novel completed as it stands today.

Snow Country is perhaps Kawabata's masterpiece. He has found in Shimamura's love affair the perfect symbol for a denial of love, and he has in the woman Komako and in the shadowy beauty of the snow country fit subjects for the haiku-like flashes that bring the denial forth. And, in the final analysis, the very success of the novel becomes a sort of affirmation of the humanity that is being denied.”

To watch, visit the NHK site by clicking the links below.