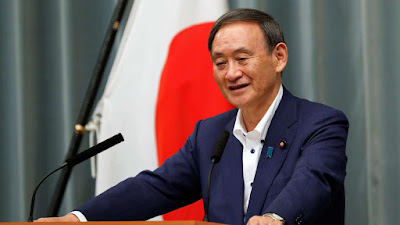 Rently, the new PM of Japan, Suga Yoshihide is supposed to move ahead with the policies adopted by former PM Abe Shinzo. During his first foreign visit to Vietnam and Indonesia he pledged for free Indo-Pacific region. In 2012 former PM Abe Shinzo also visited these two countries after taking oath to the office. Indonesia and Vietnam play an important role in Association of South East Asian Nations (ASEAN). Amid Chinese maritime activities in South China Sea, this visit of Suga is as a considered diplomatic strategy to check the expansionism, an ideology adopted by the present government of China to dominate the neighboring countries and controlling the navigation.

Vietnam is Chairing the current ASEAN bloc of ten countries and Indonesia was vocal to ensure the free Indo-Pacific movement despite potential pressure from Beging. In the recent years US military and Chinese Forces seen several face-off in South China sea and else where. This visit will serve the purpose of Japan-US security and economic alliance.

In the meanwhile Japanese travel and tour industry has suffered severely due to global lockdown hampering the economic growth. The leaders discussed to open the travel and boost the business activities. Several auto corporations have their settlements in Indonesia and need an instant relief. Suga’s journey helped to the Vietnamese economic development as well. The Bangkok Times stated, “Vietnam's growth potential and low-cost labour supply continues to curry favor among Japanese companies, which regard the country as the most promising place in Asia to invest in 2020. Previously, Japan gave ¥200 million (59.7 million baht) in aid to help Vietnam fight the pandemic.” Vietnam and Japan both are willing to play a vital role in maintaining security and economic stability in ASEAN region. Free and open Indo-Pacific was the key agenda during his visit and Suga assured for the same.

China is in confrontations with most of her neighbors including India and Japan. After loosing the case in International Court of Justice (ICJ) there no stoppage of its ‘illegal’ activities in South China sea, which is a matter grave concern for global community and peace loving nations. Indian Prime Minister Modi, on many occasions, condemned the idea of expansionism, without citing China directly. The same suit is followed by Mr. Suga and outgoing US president Mr. Trump.

Suga Yoshihide’s visit is also termed as an act of balancing. Indonesia is the only member of G-20 from the region and Vietnam is continuing his economic growth. These two countries can help and protect the interest of Japan in particular and Japanese allies in general. It seems, to contain China, in South China sea is primary purpose of the visit but moving ahead with business is also equally important in the current prevailing situation of pandemic Covid-19. ASEAN and Japan are interdependent on each other in context of economy and security. Developing a personal relation with Indonesian skipper Joko Widodo will serve this purpose.