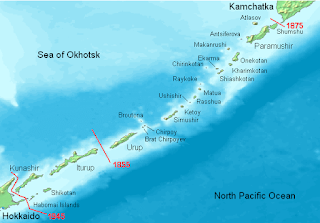 Last month Russian president Vladimir Putin visited Japan. His counterpart PM Shinzo Abe at various venues entertained him across Japan and both of them are hopeful to improve their bilateral relation. It is known fact that Japan and the US share very strong defense and economic ties. That is the reason that Japan has to participate in sanctions imposed by the US on Russia over the issue of Crimea annexation. Ukraine and Russia came in front of each other and as expected the US imposed sanctions on Russia, creating more difficulties to one-time superpower nation.


There are four islands in the northern part of Hokkaido, Japan, which are, at present, under the occupation of Russian administration. Almost one thousand Japanese, born in those islands, are still living in different places of Japan. They claim those islands as their motherlands and met PM Abe to initiate the process to ensure their smooth access to those areas. Many of them have their ancestral graveyards and had been denied to pay annual tributes because of the stiff laws imposed on foreign visitors to reach the area. The Kuril Islands, as called by Japanese people are now becoming part of the public discussion and a national issue. PM Abe raised this issue while meeting President Putin. It had brought some hope for islanders of Kuril to visit their ancestral land with ease.
There are several smaller territories, with human habitation or without it, which are engaged in disputes among the nations. Another inhabited island of Japan, Senkaku, is claimed by China. China has raised the issue of Senkaku on several international and bilateral forums. As the economy of China is expanding, it is creating pressure over its own neighbors. It has territorial disputes with Philippines, India, Taiwan and Japan. President-elect, Mr. Donald Trump has already given an indication to tackle Chinese administration on various counts. But, China is not worried at all. It has created dependence for the other nations. In the case of the Chinese economy is affected, it will affect the rest of the globe. So there is a remote chance for any direct confrontation between existing superpower and the emerging superpower.
Like Japan, Russia and China, there are more than a hundred territories all over the world where two nations or several nations are engaged in disputes. Sometimes these disputes trigger a major war. There are examples of such happenings. There are examples of continuous confrontations at several places. Israel with Palestine and India with Pakistan are facing regular confrontations. Despite agreements, many precious lives are lost every year due to territorial disputes. The initiatives of UN and other global agencies were not able to provide any amicable solution to the issue. Though some nations had resolved the issue peacefully. Such an example is of Bangladesh and India. It is possible for other nations too, to follow. By resolving these territorial issues, militarization across the world can be controlled and economic relations can be improved among nations. There is also a concern for the innocent citizens who reside near the borders of these disputed territories. Ultimately every citizen must be ensured for a secure life. This is the only purpose of the world agencies.