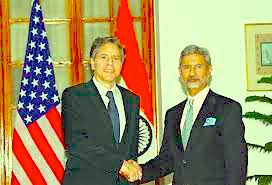 The USA wants India to play a bigger role in Asia. To contain Chinese exapansion in its neighborhoods-South China Sea, Senkaku Islands (Japan) and various parts of India and elsewhere in world, a new alliance-Quad-was formed and made active during recent years. This alliance of four countries- is annouced as a non-military, civil alliance but it seems to target military, economic, and debt-developmental expansions by Chinese Government. Quad has clearly asserted to move ahead with restoration of democratic values all across the world and work for human rights in Hong Kong and other parts of China including Tibet. At presernt, the nations under Quad have pledged to contain Covid-19 pandemic and aimed to put the global economy on path.

In a joint press meet Indian External Affairs Minister-Mr. S.Jaishankar Says, ‘Whether it is responding to the COVID challenge, cooperating on defense and security, encouraging trade and investment, addressing climate change, or expanding education innovation, I can say truly that there is much that has happened in 2021’. He clearly indicated security and defence cooperations, the key issue, which is downplayed in formal meetings. Chinese ambition to become a global power is obvious; but treating India as an enemy nation and creating nuisence in its neighborhood is major concern to achive this goal. Democratic forces are worried and cautious about the Chinese ‘Intentions’ and always keep an eye on its activities. The general global opinion is that China adopts ‘unfair’ means to ensure her winability and gain economic profits. It supplies poor quality products to under developed countries, allows cyber attacks and hackings, constructs illegal infrastuctures, traps poorer nations in debts, supports and saves terror groups and army coup, does not follow international courts orders and crushes human rights with in China with brutal force. The western nations, particularly the US leads such campaigns against China and a wider general global perception is against China. Recently, China, created hurdules in a fair enuiry of Corona virus spread. A common sense asks, is it just a coincidence, that the location of original spread and establishment of premier Chinese virology lab is the same. If is mere a coincidence, it should be called ‘wonderful’.

The secratary of the State addressed the press in a personlised manner, which is rare for US ooficilas, he said,‘There are few relationships in the world that are more vital than the one between the United States and India. We are two of the world’s leading democracies, and our diversity fuels our national strength. We are two of the world’s largest economies powered by the innovative spirit of our people. At a time of rising temperatures and sea levels, we – two of the world’s largest carbon emitters – are on the front lines of the climate crisis and the leading edge of a new green economy. Our countries know firsthand the lethal consequences of climate change.

And the Indian and American people are united by millions of family ties stretching back generations and by shared values and shared aspirations. Together, the actions of – that India and the United States take are shaping the 21st century and beyond.’

It was a touching speech for Indian people. Biden administration has incorporated a large number of Indian Diaspora and has given them key responsibilities. Need not to mention, Kamla Harris, the Vice-President. The QUAD is progressing and will shape the Asian development. It’s time for China to rethink about its role in maintaing global order.