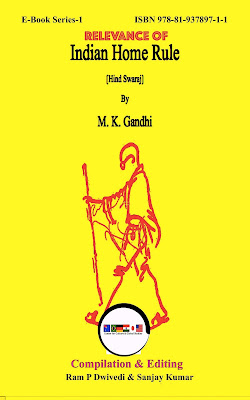 The contemporary politics and civilizational framework have brought distress and created elusory conditions to the common folk all across the globe. Marxism and other dominant ideologies are no more trusted by the people. New paradigms like ‘Post-truth’ and ‘Post-postmodernism’ are emerging in the intellectual arena. Nations getting sovereignty and freedom but in new global economic scenario interdependency among countries is on the rise. Gandhian philosophy is yet to be tested by the governments. Clashes among civilizations are on the rise not among the nations but within a homeland as well. Political ideologies and parties are dividing their own citizens on the basis of race, color, caste, religion, region and other identities to gain and retain power. It is a time of technology-controlled information. ‘Filter-bubble’ is a well-discussed phenomenon among social scientists. Under these circumstances, there is a dire need to find a solution for a larger population. In our opinion, this book-Hind Swaraj or the Indian Home Rule is still relevant and moves our thought process.
The idea of democracy has come under the lens of the political pundits. There is vast use of money, media and muscle power to win the elections and formation of governments. Use of cultural, religious tools cannot be justified to gain authority. How to fight with our opponents is another issue, which has been discussed in the book. In a democracy, the existence of opposition has a very constructive role to implement the policies and get them corrected. Criticism is not a threat but an opportunity to introspect, which is lacking in the present time political scenario. Respect for others and the unwanted is an art, which one should learn for a healthier democratic environment. The Indian Home Rule is full of such inspirations.
It is marvelous writing of Mohandas Karamchand Gandhi. It presents discourses on the Western and Indian civilization, the role of machinery in human life, the need of medical sciences, role and responsibilities of journalists and media, the judicial system, religious thoughts, the railways and the politics of power and good governance. The process of Globalization, Free Market and Liberalization are heading towards a new failure. The purpose of this book to present before you, again, is to energize and revitalize your minds in the time of pessimistic politics. This writing also gives strength to struggle and opens avenues to introspect. Written in dialogic form, this book should be re-read by those who want to do politics of Swaraj and still have a hope to shape the society. Developmental issues have become part of our daily life. They are setting agenda for doing politics and guiding the voters. Gandhi has criticized the very development concept under the aegis of capitalism. As a citizen, we have to evaluate the need for development forwarded by the politicians and projected by the media, on the basis of the ideas given in this work.
The questions of ‘Ruling and the Ruled’ rose by Gandhi almost a century ago, are still relevant. The contemporary political, cultural and economic landscape of India does not present a positive roadmap for farmers and youth of the country. Unemployment and depression emerged due to it filling the minds with violence and hatred. The social and cultural divide is quite prevalent. Gandhi shows us the way for nation-building and character upliftment. When dissemination of information has become a fingertip affair, one has to be cautious what to put in public domain. Cultural dominance hampers the harmony of the society, Gandhi elucidates. The brute force has no role in our civilization. The Reader and the Editor, of this book, finally give a vibrant message to all rulers to be judicious and non-violent. The simplicity of the language is another fascination to read it.